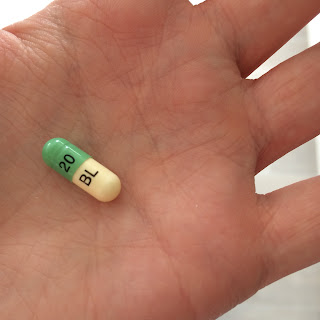 Hi everyone! As you've probably noticed I don't really blog very often. It's hard work finding time to blog with a toddler. I don't know how anyone does it with more than one child!

This post is more of a diary entry to mark a big day for me - I've just taken my last Fluoxetine antidepressant tablet this week. I'm not saying I'll never need them again, but for now I'm done :)

Mental health is talked about so often now. But still the only people who know I've even been on my tablets are my husband, mum, sister and two close friends. The rest of my family don't have a clue. Is that bad? I guess it's an example of how the stigma still exists... but I just don't want everyone to know my business. Not because I think they would be mean about it - I'm just quite a private person.

Everything was too much for me last year when I had gone through a bad assisted birth, struggled to recover physically eventually needing physio, we sold our house and couldn't find one to buy, I started having flashbacks to the birth and got all shaky whenever I had to drive past the hospital (this was about 4 months after I had my baby), then we had to move into my mums house while we searched for a house, put all our stuff in storage, she has no spare bedroom so we had to sleep on the floor and sofa (we lived here for 5 and a half months).... then we bought a house that needed full redecoration as we couldn't find anything else we liked. I was so against going on tablets for my own reasons, but no wonder I ended up struggling.

After three months of sleeping on the floor in the box room with my baby J in a cot, and my husband sleeping on the sofa downstairs it was all a bit much and my mum took me to the doctors.

I felt that the tablets started to help me straight away, and after starting them in July I felt I was totally back to myself in October. Then the 6 month countdown began before I could lower the dose. I've been on a half dose (one every other day) for 4 weeks and that meant Wednesday 26th April was my last one.

I'm feeling positive about it and looking forward to properly moving on from what was a really difficult and totally unexpected time. I just never thought these things would happen to me...but they did, and I've learnt a lot from it.

Thanks for taking the time to read this :) x